Brad, the Leaves, and the Squirrel

[You'll find this story at about 20 minutes in this video.]

I grew up in what is now the Silicon Valley, and I went to Fremont School for kindergarten in Menlo Park, which was about a mile from my childhood home. 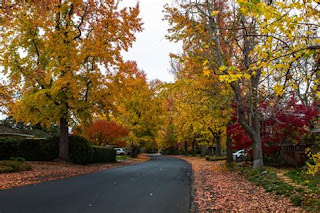 In those days, I used to walk home with my best friend Brad. It must have been early in the school year. And the fall had started and the leaves were coming down. After Brad and I turned the first corner—just a block from Fremont School—we came upon what seemed to me to be huge trees dropping beautiful brown, yellow, and orange leaves.
But it wasn’t only their colors; it was their flight pattern as they fell that was marvelous and mysterious. They would swivel and dodge as they descended. Brad and I discovered they were impossible to catch.
But we tried. We tried again. We tried but couldn't catch a single leaf.
We were mesmerized.
And while we were trying to catch these incredible, miraculous falling leaves, we saw a squirrel.
And being five at the time, it was fine to talk with this animal. So, Brad and I started chatting with him,

“Hi, squirrel. What are you doing squirrel? It’s good to see you Mr. Squirrel”

Between the leaves, Mr. Squirrel, the fall, the friendship, time began to pass in the way the writer Anne Lamott describes childhood—in “big, round hours”
So, I was surprised—but now I realized I shouldn’t have been—when my dad arrived probably an hour later, worried about where his son was.

“Greg, what have you been doing? You should be home by now”

You might think I wasn’t worried—but no, I was still entranced by all the wonders of this autumn moment.
I told him,

“Dad, Brad and I were just here talking to Mr. Squirrel—see him up there—and trying to catch the leaves. See, Dad, as they fall (and I demonstrated) you can’t catch them. Look.”

And here’s the proof that my father was truly the laid-back Greek: he just let us try to catch leaves—and ever after that day, he always talked about how wonderful it was that I took some time in the midst of a day to catch beautiful autumn leaves and talk to squirrels.
In fact, when I described this scene to my dad a few years ago, before he died, he responded with one word:

Since then, I've spent a good deal of my energies on relating my faith with science. And I've discovered this is central: to read the two books--the book of nature and the book of Scripture--to see the beauty in life and the beauty of God and simply say, Marvelous.
Posted by My Reflections at 4:30 PM

An edifying story that is rooted and grounded in love. Thanks Greg for this invitation to joy.

Glad you read it and that it spoke to you. It was a special moment.

Thanks Greg for the reminder of childhood bliss. Repeating these activities as an adult are invigorating. Rock skipping, laying in a field of tall grass eating the sugary sap, stomping on the car counter on a country road adding a 1000 cars to the total (it was repaved shortly thereafter, we claimed credit)

Thanks Greg for the reminder of childhood bliss. Repeating these activities as an adult are invigorating. Rock skipping, laying in a field of tall grass eating the sugary sap, stomping on the car counter on a country road adding a 1000 cars to the total (it was repaved shortly thereafter, we claimed credit)