Why I Wrote Science Religions: A New Look

The first thing to tell you is why I wrote this book. 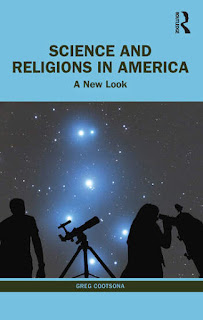 You see, I’ve been unsatisfied with what I’ve found in “science and religion” books. They strike me as incomplete because they are essentially “monotheism and science” or “Christianity and science.” At some level, this is understandable and perhaps pardonable, given that the science commonly practiced derives from the European Scientific Revolution— which I’ll call in these pages “modern science”—and that this European context was predominantly Christian. Nevertheless, as I’ve taught hundreds of students and lectured to as many over the past two decades, I keep getting asked for a truly multi-religious approach to science. Why? There are, as I read in the National Congregations Study: “about as many synagogues, mosques and Buddhist or Hindu temples in the U.S. (9% of all congregations) as there are Catholic parishes (6% of all congregations)."

We need to take in this religious diversity and its impact. Toni Morrison once wrote,

“If there’s a book that you want to read, but it hasn’t been written yet, then you must write it.”

And so, I’m writing this book because it doesn’t exist yet, at least for use in my undergraduate courses at Chico State.

But it’s not just for my students, and this leads to a relevant question, Is this topic important to you too? Not surprisingly, my answer is Yes, but it might not be evident why—almost all other vital cultural topics find their way through science and religions. When we look, for example, at the COVID-19 pandemic, discussions about race, or the contentiousness of evolution and climate change in the United States, we need to understand the cultural history of science and religion—and how the two are still intertwined.

This brings me to three phases of books written on science and religion.3

Then, a second phase appeared, as in Alister McGrath’s 2010 Science and Religion: A New Introduction (in its second edition, to be precise), which I’ve used as textbook. This and other texts take up science and its relationship with western monotheism and then add a chapter or two on “other religions.” Tipping their hats toward religious diversity, they still center on Christianity.

In my teaching, this seems inadequate, and my concerns are echoed in this summary from the Stanford Encyclopedia of Philosophy,

I’d like to think this book is part of a third phase, exemplified by Science and Religion Around the World, edited by John Hedley Brooke and Ronald L. Numbers, a truly decentered and pluralistic approach to religions and science. Like the authors in this collection, I am not assuming monotheism, morality, and metaphysics (though, as an American scholar, that bias is always close at hand). The book I’ve written is also a bit different in that it’s for those who aren’t specialists in the field of religion and science.

And this brings me back to my students and what they need and are asking for, as well as those readers who aren’t college students in my Science and Religion course. I think you’ll understand American life and better through studying science and religions (in the plural). The payoff here is that we gain insight into so many other topics.

Posted by My Reflections at 5:42 PM

Email ThisBlogThis!Share to TwitterShare to FacebookShare to Pinterest
Labels: science and religion