A Reflection on Technology and Angst

I've been pondering again why so often we are so drawn to our smart phones instead of to other human beings. 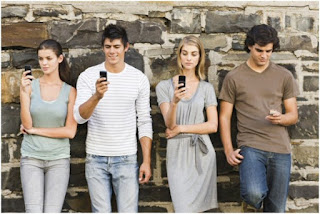 MIT professor Sherry Turkle, author of both Alone Together: Why We Expect More from Technology and Less from Each Other (2012) and Reclaiming Conversation: The Power of Talk in a Digital Age (2015) emphasizes (by my reading) how technology invades and prevents true human community. Tech often gets in the way of true conversation and empathy.

In my hometown, there’s a phone app developed by Chico State grads, PocketPoints, which rewards its users if they turn off the phone during college classes. As they state clearly on their website,

“Phone addiction is a pervasive problem.”

A friend—a younger friend at that—cannot help but notice that, during a quick stretch break I usually offer my students in the middle of lectures, the students quietly text their friends or check their social media instead of meeting the people right in their vicinity. He’s rather blunt at this: “Why wouldn’t these guys want to know all the gorgeous girls that are all around them?”

Or as Turkel puts it:

Indeed. We feel anxious about messy conversations in real time, with real people, and thus more comfortable “connecting” virtually. And—though I doubt this is true in my classes—my students are probably just a bit bored.

Boredom and anxiety—that potent combination which together make the German word angst and the French version ennui—propel us toward our cell phones like the proverbial moth to flame. The little shot of dopamine that’s released as we are stimulated by the next scream has addictive qualities. And so we continue. Angst stimulates our flight toward cell phones. And so it is particularly with emerging adults, who were given screens to quiet them as fussy babies. Such earlier training is sticky and recalcitrant.

The lurking question is what will retrain us. But I'll leave that unanswered for now...
Posted by My Reflections at 8:46 AM No comments: