(On the plane last night I touched up the first few paragraphs of my new book on C. S. Lewis. The manuscript's about to be sent off to the editor. So let me know what you think.)

A young man who wishes to remain a sound Atheist cannot be too careful of his reading. There are traps everywhere—“Bibles laid open, millions of surprises,” as Herbert says, “fine nets and stratagems.” God is, if I may say it, very unscrupulous.
C.S. Lewis, Surprised by Joy 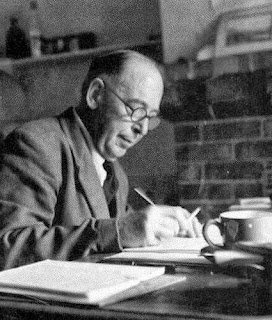 In an introduction that I can still remember reading for the first time (because it so well captures his voice), C. S. Lewis tells us that his Reflections on the Psalms is “not a work of scholarship. I am no Hebraist, no higher critic, no ancient historian, no archaeologist.”[1] Lewis was always clear—and here wanted clearly to delineate his work from other commentaries on the Psalter.
Similarly, I want to be clear: I am not writing a biography of Lewis. Instead of answering who he was, I will take up a version of the question of why Lewis is still so popular, selling more books today than when he died in 1963. Here’s my answer: Lewis’s voice still resonates because his crises and their resolution in his writings meet our crises and help us to resolve them. In short form: Lewis’s crises meet our crises. I begin then by telling the story of Lewis’s life through the troubles and complexities that shaped him. I will then pursue his thoughts through his writings—which is what he’s best known for—and the way his books, articles, and published addresses offer us access to his wisdom. I do this because Lewis’s crises formed his writing and give it the power that resonates for his readers.
Crises are, as Webster’s puts it, “an unstable or crucial time or state of affairs whose outcome will make a difference for better or worse.”[2] Either positive or negative, they always carry with them momentous change. I will describe C. S Lewis’ life’s storyline around six main crises, each that define a decade (more or less) of his sixty-five years. Using the language of film and television, these crises become “plot points,” which represent significant events within a plot where the action digs in and pivots toward another direction. These are points around which the plot revolves. They can be an event, an item, or the discovery of a character or motive. In this case, the “plot” at hand is the life of Clive Staples Lewis. His plot points are the times in which the story of his life altered dramatically, where he confronted crises and sought to resolve them
[1] Reflections on the Psalms (London: Geoffrey Bles, 1958), 1.
[2] Webster’s Dictionary New Collegiate Dictionary (Springfield, Mass, 1977).
Posted by My Reflections at 9:50 AM 2 comments: