The Whole Gospel or The "Hole in Our Gospel"? Miscellaneous Reflections

This year, our church is taking seven and half months to study the Gospel of Luke. And though it doesn't appear until Luke 4, the key for understanding Jesus in Luke comes when he stands up and proclaims his mission in the little town of Nazareth (a place so tiny and insignificant with its 200-500 residents that it's only mention in the New Testament in the centuries of Jesus's birth). Jesus reads the biblical scroll and declares that Isaiah's prophecy is fulfilled in him and that five priorities will mark his mission:


He stood up to read, and the scroll of the prophet Isaiah was handed to him. Unrolling it, he found the place where it is written:

"The Spirit of the Lord is on me,

because he has anointed me

to proclaim good news to the poor.

He has sent me to proclaim freedom for the prisoners

and recovery of sight for the blind,

to set the oppressed free,


Good news to the poor, freedom for prisoners, healing the blind, setting oppressed free, and proclaiming God's favor: That's what Jesus went about doing. And that's also the task of the Christian community. Some, like Richard Stearns, CEO of the Christian relief agency World Vision, state that the church has missed the mark and that we have a "hole in our gospel." Full disclosure: I haven't read the book (yet) because I'm already convinced we need to put together care for the soul ("evangelism") and care for the body ("social righteousness"). But my friend Richard (actually I don't know him, but he sounds like a good guy) and I agree, when you bring together the caring for the whole person--when we bring the Good News of knowing God, when we build homes and set poor free from disease, when we proclaim God's favor to those the world discards--that's the whole Gospel. 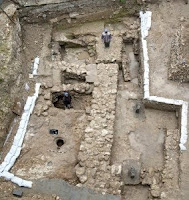 Back to Nazareth for a moment... I've included a picture below of a recent--I mean as in last-month recent--excavation that found the first archeological evidence of a first century house in Nazareth. Now this may seem like I'm digressing. Well, first of all, I warned you that these are "miscellaneous reflections," but I promise I have a point: Jesus's hometown is small, God came to ordinary folk, and so when Jesus proclaimed his mission he did so without media blitz and far from a metropolitan center.

Why then was his mission remembered? Because of Jesus, who we was and what he did and what his first followers were committed to: namely, the whole Gospel. Maybe in a time when Christians feel marginal today--no less marginal than the little town of Nazareth-- here's why: we're stuck in the hole in our gospel.
Posted by My Reflections at 11:40 AM 2 comments: