I know the main emphasis in the story of David and Goliath is about the little guy defeating the behemoth. It's even become part of our common language--when a start up takes on an established megalith corporation, the New York Times calls it a "David and Goliath." Nothing wrong with that, but it's better to add back into the mix that God fought for David in 1 Samuel 17. 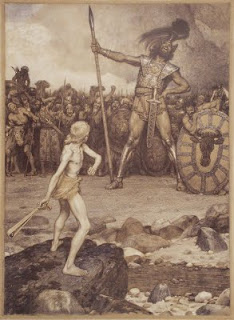 But something else has hit me as I've been reading the story of David and Goliath: I've been struck by the way that David's life had prepared him for the big battle. He'd been prepped. First of all, he was an armor-bearer for Saul the king (so he knew battle), and secondly, he had fought bears and lions already. As David remarks to Saul just before battle (1 Samuel 17: 36):


Your servant has killed both lions and bears; and this uncircumcised Philistine shall be like one of them, since he has defied the armies of the living God.


I take something from this: God doesn't let us face the big moments in life usually without some preparation. A lot of times it's probably not all related to the later event--what do shepherding and fighting a gargantuan Philistine have in common? Still we're given the means now for what's coming tomorrow. The key is to learn today. Then we're prepped for the big moments to come.
Posted by My Reflections at 11:10 AM 2 comments:

Email ThisBlogThis!Share to TwitterShare to FacebookShare to Pinterest
Labels: 1 Samuel 17, David and Goliath

But Ruth replied to Naomi, "Don't urge me to leave you or to turn back from you. Where you go I will go, and where you stay I will stay. Your people will be my people and your God my God. Where you die I will die, and there I will be buried. May the LORD deal with me, be it ever so severely, if even death separates you and me. (Ruth 1:16-17, TNIV) 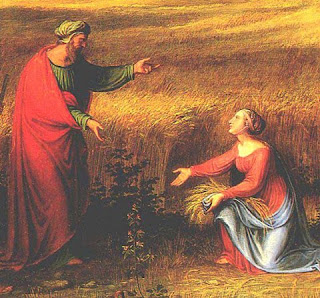 One of the amazing themes of the Old Testament--and my last few posts--has been the provident care of God through all the bad times—through the trials of Joseph whose brothers threw him down a pit to kill him, through this young queen Esther who was placed at the heart of the powerful Persian empire when the Jews were about to be killed, and here through, a foreign, Moabite daughter-in-law, Ruth, as she cares for her Jewish mother-in-law, Naomi, and then in response, when Boaz demonstrated care for Ruth beyond what was expected (thus the picture to the right illustrating that last scene in the book of Ruth).

Through human actions, God has provided for his people. And so the book of Ruth brings us to the doctrine of providence. What is it? (By the way, a majority of this next material comes out of my book, Creation and Last Things. You can get more info by checking out the weblink to the right.)

The word providence derives from two Latin roots (pro-videre) that mean to “fore-see,” which also includes the concept of looking ahead so as to “provide.” Webster’s definition is rather concise: “divine guidance or care.” From this foundation, Christian theologians have sorted out three related components to providence:

The Drew Seminary theologian, Thomas Oden, who has worked tirelessly and effectively to rejuvenate classical insights, summarizes providence this way: “Three affirmations summarize the Christian teaching of providence: God is preserving the creation in being. God is cooperating to enable creatures to act. God is guiding all creatures, inorganic and organic, animal and rational creation, toward a purposeful end that exceeds the understanding of those being provided for.”

So what is the bottom line? God continues to care for us and for all creation. The amazing insight from Ruth is this: God uses ordinary human beings--you and me--to enact his providence with our friends, our family, our city, our nation, and our world. Amazing, almost blasphemous as this sounds, God's provident care was demonstrated through the faithful actions of Esther, Joseph, and Ruth.

The question comes then to you and me: In a nation rocked by the Great Recession, in a time (at least locally) where public schools and universities have been hit with unexpected (and in my view) unwarranted cuts, where hope may be gradually leaching out of those around us, how are we being called to be God's hands and feet to those around us? Will we say yes when we are called to become God's providence? Boaz, Ruth, Joseph, and Esther did and became part of God's solution. The best way to answer that question is through the yes of action.

Posted by My Reflections at 11:01 AM No comments:

Email ThisBlogThis!Share to TwitterShare to FacebookShare to Pinterest
Labels: Providence, the book of Ruth

I will begin by simply reporting what my recent New Yorker recorded. The topic was whether Google was becoming too diffuse, spreading itself too thin. Ken Auletta drew on an apparently well-discussed 2006 memo from a Yahoo senior vice-president, which has become known as the Peanut Butter Manifesto. It reads:

We lack a focused, cohesive vision for our company. We want to do everything and be everything--to everyone.... I've heard our strategy described as spreading peanut butter across myriad opportunities that continue to evolve in the online world. The result: a thin layer of investment spread across everything we do and thus we focus on nothing in particular.


Now you know I'm going to ring some changes on saying yes and no here. If Yahoo specifically, and Silicon Valley generally, have found that saying too many yeses is a bad practice that leads to nothing and nowhere in particular, we might also have something to learn. Although I love peanut butter, it seems to me that the reason this memo became famous (or infamous) is that it resonates. In organizations trying to compete in a wildly diversified market, it's become increasingly clear that we have to do a few things well rather than a number of things badly.

I'm working on my class tonight, "Getting Closer to God through Simplicity," and this Peanut Butter Manifesto probably needs to be applied to our spiritual lives as well. We spread ourselves too thin, running around from one task to the next, and find little room for our spiritual Center. Or at least I too often do.... My task tonight is to remind us that, in order to renovate our lives--and now to change the metaphor--we have to "edit what we have," as the famous designer John Wheatman wrote. (That brown vinyl lamp may need to find its way to the Salvation Army before the living room remolded can start.) Once we make some room in our lives, we find that God has been there all along.

It's a good topic. Maybe I'll bring peanut butter and invite some Yahoo executives....
Posted by My Reflections at 6:06 AM 2 comments:

I've been reflecting on the first chapter of Daniel and the topic of "No Compromise." My mind keeps flashing back to the gospel singer Keith Green and his powerful 1978 album of the same name: 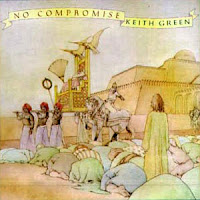 (The album cover by the way actually reflects the life of Haman, who refused to bow down before the king in the book of Esther. But it's the same message....)

What gripped me about this slogan then, and still does, is the decisive nature of Christian faith and that it sometimes has to stand quite definitively against the grain. It's what God says to Moses on Leviticus 19:2, "Be holy because I, the Lord your God, am holy." Or what Jesus stated quite succinctly in Matthew 6:8, "Do not be like them." Christ sometimes stands "against culture" as the 20th century theologian H. Richard Niebuhr put it.

The amazing thing about Daniel and his three friends, Meshach, Shadrach, and Abednego, is that even when they stood against the culture of the Babylonians, God didn't diminish their influence, he increased it. I've seen that happen--to the degree that I've lived for what God wants in my life, I deepen in integrity and character in ways that make me more effective in the world. As Keith Green wrote, that's a prayer worth living out.
Posted by My Reflections at 6:42 AM 1 comment:

Joseph's amazing statement in Genesis 50 to his brothers--the ones who tried to kill him by leaving him in a ditch in the desert, those guys--is resounding in my ears. How do we forgive and really mean it? How do we actually go beyond forgiveness and move to reconciliation?

The key verses happen at the end of Genesis when Joseph, now become upwardly mobile in Egypt, is heading up the food distribution and his brothers, who are starving because of famine, have come asking for some food. Just to repeat: these are the brothers who tried to kill Joseph. Using a translation suggested by the Jewish Study Bible, here are verses 19 and 20: 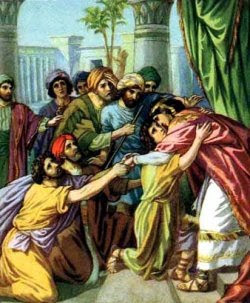 But Joseph said to them, "Don't be afraid. Am I a substitute for God? You intended to harm me, but God intended it for good to accomplish what is now being done, the saving of many lives.


I've been pondering this response. I think the turning point for Joseph was that he remembered his God and specifically that God is working for good even when human beings are working for evil. One point I don't want to miss is that Joseph doesn't call his brothers' actions good just because good ultimately happened. How many times have I heard this--"Don't worry about what they did. It's fine. I all came out ok in the end, didn't it?" To be frank, duh! That's what a good God does--God brings good out of evil. But we should never call evil good.

More importantly, Joseph remembers that he can forgive and even reconcile with his brothers because of God's guiding hand. It's not that different from what Paul several hundred years later, "We know that God works all things together for good for those who love him and are called according to his purpose" (Romans 8:28).

Good for Paul. It's also good for Joseph--a trickster, not always a honorable in his actions--but someone who finished his life well. (The next verses in Genesis 50 narrate his death.) He reconciled with is family. Ah, but can we remember that fact when we've been hurt? That's the big question.
Posted by My Reflections at 10:20 AM 4 comments: