Next Steps: How to Integrate Mere Christianity with Mainstream Science

In various posts, I've presented reasons why we need to bring science to church, why we need to integrate mere Christianity (to use C. S. Lewis's term) with mainstream science.

With this in mind, what do we do?

Francis Collins, after his talks, offers his audience copies of Mere Christianity. That’s one effective way to counter atheism. (And why not add N. T. Wright’s Simply Christian or Tim Keller’s The Reason for God?) 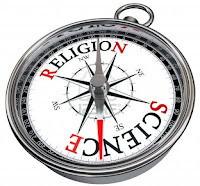 But if that’s all I wrote, I suspect you might sense I’m passing the buck.
Ideally, in order to respond to these trends, we’d all have degrees in science, theology, philosophy, or all three. This, however represents an ideal and not the reality. Most of those who lead emerging adult ministries or simply care to talk with 18-30 year olds, will be learning science on the side or as a component of their wider ministry skills. We have to learn who the key influencers are, and to know what’s Top Ten Hits on the Science music list. Similarly, youth workers and theologians Andrew Root and Erik Leafblad advocate, “While it is unreasonable to become scientists, as youth workers we need to become knowledgeable about the ways in which science helps frame reality for our students.” Encouraging ministry leaders to read the New York Times “Science Times,” attend public lectures at their colleges, or read Best Science and Nature Writing.
Second, get to know the thought leaders and those who know about them. This is even more critical for college ministries, but also easier—get to know scientists in local congregations and those in university positions nearby. Attend a talk at a library, community center, or college nearby.
Finally, know where honest science finds its own limits (not where popularizers want to use science to promote their aims). Even more where it invites deeper wonder and worship. Science may just be playing the intro to a much broader song, even a symphony.

“Science can be one piece of a broader and ongoing invitation to wonder and adventure, as well as doubt and uncertainty in life with God.” Andrew Root and Erik Leafblad

In many cases, this evokes wonder and awe at the natural world God has created and lead to deeper worship. In others, this investigation of science leads to a realization that there are limits to scientific insight and discovery and faith and wonder in the God beyond the natural world is the only reasonable conclusion.
Only God is God, and his book of Scripture complements, but is certainly beyond the book of Nature. Blaise Pascal, who lived in the seventeenth century and contribution to the birth of modern science, knew the limits of scientific and philosophical reason:

Sexuality: When We Ask Too Much of Science (Part Two)

Last week I touched on climate change and the ways we ask too much from science.

With sexuality, we often ask too much in an almost diametrically opposed way. We demand that scientific studies tells us more than it’s able, believing that science can determine and not inform our ethics. This is another mistake of relating the Book of Nature and the Book of Scripture (to use that well-worn analogy). But there are fundamental limits to what we can learn from the natural world.

In one of my interviews with emerging adults I talked with Tracy, age 19, who told me quite confidently:

“It’s proven in science that you don’t choose to be gay. Denying that makes you look ignorant.”

And I can assure that this position is popular with 18-30 year old (according to surveys and particularly in my conversations). Our genes fully determine our sexuality and sexual behavior.


“The genes made me do it. and will always make me do it.”

Whatever the “it” is.

But if our genes made us do it, then where is our moral agency for any action? These are questions that our theological and philosophical traditions have wrestled with for centuries.

It may be necessary to understand any genetic correlations with sexual orientation, but I believe that’s insufficient for our ethics, sexual or otherwise, and I call on the best ethical and biblical minds in the church to keep engaging these questions using science as a guide but not a dictator. How we end up on all this is not entirely clear. Put thought leaders like Rachel Held Evans, N. T. Wright, Jen Hatmaker, Tim Keller, and Rob Bell in one room, and I think there’d be more than one opinion. In fact, I’d direct you to any of their works for thoughtful ethical conversation about sexual ethics.

The point of all this is that the Two Books must be read as complementary. To respect their differences is to realize that they have different insights to share.

Where are you on sexual ethics and science? How much do scientific studies tell us about sexuality?
Posted by My Reflections at 7:00 AM No comments:

This piece appears on my HuffPost blog (and more can be found here), but I thought you might want a taste.


“There are two types of people—those who divide people into two types and everyone else.” Mark Twain

With Twain in mind (as he indeed did cleave humanity in twain with this quip),
I’m willing to say that there are two basic approaches to our existence:

Life either bursts with meaning, and we can receive it as a glorious gift.

Or it is meaningless and that makes life a dull fact. 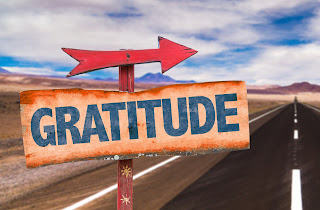 It doesn’t take much scrutiny to find that the Bible teaches the first alternative is better.
“Give thanks in all circumstances,” as Paul summarized it in 1 Thessalonians 5:17.
Well, in addition to the Scriptures, it also seems like several contemporary sciences are doing the same thing.
This may not be news to some, but studies of gratitude and its positive benefits.
(I’ll use thankfulness as a synonym to avoid repetitiveness) have become a cottage industry.
There’s a wealth of information on both the benefits of thankfulness and the ways to cultivate it.
Simply put, it seems that gratitude makes us healthy. [I close with this....] 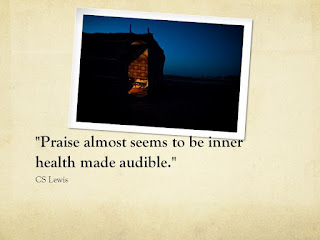 Gratitude is intimately tied with praise, which is, as C.S. Lewis put it, "inner health made audible."
Gratitude is the proper stimulus to love the other.
And maybe that’s where praise, gratitude, and love come together.
Posted by My Reflections at 6:37 AM No comments:

Global Climate Change: We Ask Too Much of Science

(One note: Check out the new gadget where you can sign up to have my blog posts sent directly to your email. It's just to the right of this sentence!)

One of the tried and true ways to relate the Bible and the discoveries of science has been the Two Books model. There’s the Book of Nature and the Book of Scripture, and God is their sole Author. Francis Bacon, one of the pioneers of modern science, phrased it this way,

"God has, in fact, written two books, not just one. Of course, we are all familiar with the first book he wrote, namely Scripture. But he has written a second book called creation." Francis Bacon (1561-1626)

So ultimately a contradiction between the Two Books is impossible.

But I often ask myself, “Are there times when I’m asking too much of science? Can it really answer more directly the questions that Christians have puzzled over for centuries by looking at Scripture, seeking discernment in prayer and community?”

Responding to those questions is what this blog post intends to do. 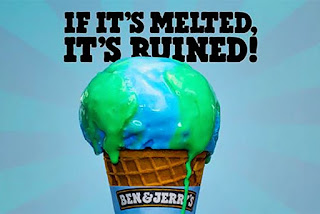 Like any association between two different entities—in this case, science and faith—resolving contradictions can be tricky. This makes it tempting to think that both parties are exactly the same. (I won’t go into the marriage analogies, but they’re there.) If we give the Two Books the same weight and voice, the Book of Nature can itself become sacred and direct the Christian community and its ethics.

Put another way, misreading the book of Nature leads us to make too much of science. And I hear that done in two different ways with a duo of contemporary issues: global climate change (this week) and sexuality (next week).

With climate change, many Americans are under-informed by the science and particularly the fact that many scientists and Christians today are calling for a response to global climate change. A large majority of scientists are convinced that climate change is occurring and that human activity is responsible.

“97% of the scientists surveyed agreed that global temperatures had increased during the past 100 years; 84% said they personally believed human-induced warming was occurring, and 74% agreed that ‘currently available scientific evidence’ substantiated its occurrence.”

They are joined by leading voices like Pope Francis and the National Association of Evangelicals, along with leading climate scientist and evangelical Katherine Hayhoe,

“Climate change is here and now, and not in some distant time or place. The choices we're making today will have a significant impact on our future.”

But why does Hayhoe think it’s human caused? As she points out, when we look at the rise of global temperatures since 1900—in other words, the beginning of the Industrial Revolution and its release of carbon dioxide—the signs of human causes for climate change are fairly clear.

It strikes me that the consensus is clear enough. We resist (e.g., President Trump’s withdrawing from the Paris climate accords) not only for scientific reasons. Some certainly see the economic loss—and those motivated by greed need to be frankly resisted. Others truly fear a livelihood in industries that are threatened (like coal), and I believe that we need to be sensitive to these concerns. Others don’t believe government should enforce the solution.

But let's not ask science to tell us what our moral wills don’t want to do.Global climate change represents one pressing issue that we have to consider as stewards of the earth (Genesis 1:26-28). When the planet is threatened by our actions over which we are stewards, we have to re-evaluate all these calculations. Most of all, we need to concern ourselves for the poor who bear the brunt of climate change. We also need to think about the future. Yes, Jesus might return at any moment, but I want to be found caring for a world that our children will inherit.

What do you think? Why don’t we listen to scientists about climate change? And more generally, how do you relate the Book of nature to the Book of Scripture?
Posted by My Reflections at 12:03 PM No comments: