Michael Jackson and the Beauty of Life

When I use the words "the beauty of life," I mean happiness. I mean that wherever we find beauty, we find life as its quintessence. And there we find human flourishing. Thus beauty and happiness--at least in my vocabulary--are seriously inter-related, if not almost coterminous.

Like so many around the globe in the last 24 hours, I've been taking in the death of the pop superstar, Michael Jackson. I'm not usually given over to this type of activity, but I watched the news shows the night of his death. They reviewed this young phenomenon who appeared on stage, flanked by his brothers in the Jackson Five and who later made an even bigger splash with "Off The Wall" and then the unprecedented, and never surpassed, sales of "Thriller." I've heard estimates of 50 to 100 million in sales of that record alone. They also noted his last decades where his artistry was overshadowed by scandalous and erratic behavior. The news reports reminded me that, after his peak at just about the midpoint in his 50 years, his fame markedly diminished.

I figured here, in this life, with all the resources of money, fame, and talent at its disposal, I'd find beauty. And, yes, beauty did play a role in MJ's life--I find his signature Moonwalk a stunning, beautiful choreographic event. Almost every one of his party anthems possess a beauty of rhythm, of energy. (And here I have to give props to his producer, Quincy Jones, who has no equal.)

But as I heard various interviews with the King of Pop, I didn't see ultimate beauty in these years of life and fame. I heard of someone whose tender years were ripped away by ceaseless performing and who had to create his private Neverland in his adulthood, who apparently cuddled young boys in order to recover a childhood he never had. I heard of someone dogged by the press, but more so, who simultaneously needed the press (and fans) to stoke his incessant desire for fame.

In the end, it's the lack of beauty in Michael Jackson's life that gives me the greatest pause. Perhaps now, that the striving in this life has ceased, he can rest in peace. May we learn how much sooner to say yes to what truly matters and there find the beauty of life.
Posted by My Reflections at 5:19 PM No comments:

Email ThisBlogThis!Share to TwitterShare to FacebookShare to Pinterest
Labels: beauty, Michael Jackson, say yes to no 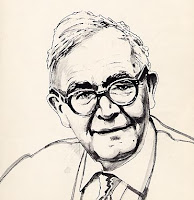 As is my habit, I've been reading Karl Barth, the great 20th century Swiss theologian. Among other things (and Barth did write a number of other things), he once remarked that theology is a "particularly beautiful science." As far as I understand his sense, Barth meant that there is an excellence, a beauty, in studiously pursuing the heart and depth of all reality, namely God. And, as someone who has done theological work, I find myself nodding my head. As I have sought to grasp a bit of what God is--trying to paint a "bird in flight," as Barth himself once wrote--there are, at points, where I catch a glimpse of getting things right, and thus of beauty. But I suppose I'd want to go just a bit further and propose that anyone who does what they are created to do engages in a particular beauty. Moreover, Barth leads me to believe that when we find our particularly beautiful science, that pursuit creates a life worth living.