The Messiness of Community and Thus the Allure of Tech 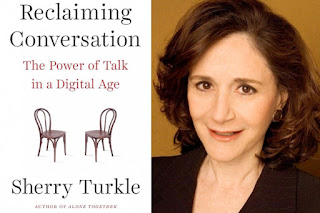 the way, is my word, not hers.) Part of her reasoning is that conversations in real time with real people can’t be manipulated like virtual interactions can be. Turkle describes a manager at HeartTech, a large Silicon Valley software firm, who left engineering for management.


“I left my previous job because it was too predictable. I wanted to work with unpredictable systems [i.e., people]” (Silicon Valley software manager).

“Challenge a view of the world as apps” (Sherry Turkle)

—the idea that some app on our smartphone will lead us to the solution to all problems. “The app way of thinking starts with the idea that actions in the world will work like algorithms: Certain actions will lead to predictable results” (Reclaiming Conversation, 322-2). But human relationships are unpredictable, chaotic, and complex—that’s what makes them both frustrating and exultant.

This “app thinking” can affect us relationally and spiritually. We think that we can manage people neatly, and if things go awry, we simply shut down that person’s “app” or “doc.” But when we do this, we treat other human beings impersonally—like they’re simply an extension of our smart phone—and this may also alter the way we approach another personal relationship—namely, with God. To take it up a metaphysical notch, our relationship with God is also messy and unpredictable. The eternal, sovereign God of the Bible cannot be managed. To cite Mrs. Beaver as she describes Aslan the Christ figure in the Chronicles of Narnia,

God is free, untamable, and not manageable by our phone apps. And maybe we are too.
Posted by My Reflections at 8:24 AM No comments:

Tech and Science: Have They Become One?

When teaching my Science and Religion class, I start by presenting key definitions, move 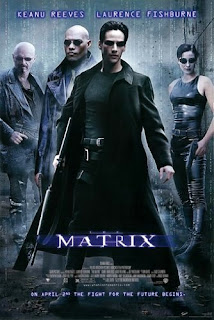 to Ian Barbour’s four-part typology for relating science and religion, examine the critical historical figures (Copernicus, Newton, Galileo, Darwin, Scopes, Collins, Dawkins, and so on), move into scientific and theological methods, and discuss how the Big Bang relates to the teaching about God’s creation of the world. During these lectures the class listens pleasantly and occasionally interacts with me. When I move on to nanobots, Kurzweil’s singularity, Ex Machina and The Matrix, the future of technology, and whether Skynet is possible, the students begin to sit up in their seats. They achieve the highest level of engagement for academic life in California: they “share.” They have much more to say here, or at least they believe they do. Technology fascinates in a way that pure science does not.

Why this shift? For emerging adults, technology is ubiquitous. They are digital natives. And even though I grew up about five miles from where Steve Wozniak and Steve Jobs created the prototype of the Apple I on Sunday, June 29, 1975, I’m not a digital native. In fact, here’s a confession: the first time I typed on a computer was in graduate school. (When I offer my students that tidbit, the looks are priceless.) So, since technology has had an enduring presence in the lives of eighteen- to thirty-year-olds, it’s reasonable to conclude that technology and social media have significantly affected their psychological development and human flourishing. Technology and its use has had a massive import on their spiritual lives.

Even more significant, there’s a perception factor: These digital natives gravitate toward discussions of technology because they sense the presence of pressing life issues, whereas they often perceive “science” as heady and abstract. When I say that I study “religion and science,” I often get the response, “Oh that’s not for me. I’m not that brainy.” But it’s different when I ask students to think about whether being “wired in” to a smartphone produces anxiety, how virtual community affects “real” relationships, and so on. My experience is that emerging adults tend toward pragmatism over theoretical speculation over a question such as, “Does quantum physics offer a place for divine action?” It doesn’t resonate.

Purists want to distinguish science from technology. While I’m sensitive to the differences, I don’t believe this strategy works. Simply put, eighteen- to thirty-year-olds have only known a technologically saturated world. Therefore technology must be prominent in any discussion with them involving scientific and theological method, interactions with evolutionary biology, cosmology, and the like.
Posted by My Reflections at 11:30 PM No comments:

Email ThisBlogThis!Share to TwitterShare to FacebookShare to Pinterest
Labels: science and religion, technology

Great Films Tell Us Who We Are

One more excerpt from Mere Science and Christian Faith, now available.
With this link, it's 10% off!

Certainly, great films entertain us. They also tell us who we are culturally. And a considerable number in the relatively recent past focus on technology, particularly artificial intelligence (AI) and robots. They exemplify a cultural landscape that affects how emerging adults see science and religion. Before those, of course, The Matrix in 1999 demonstrated the evil side of AI in which a computer program generates the artificial reality in which all humans live, itself receiving energy by literally sucking the life out of human beings. In the twenty-first century, so the film’s backstory goes, human beings created and then waged a war against these technological machines. When we blocked the machines’ access to energy through solar power, they began to harvest the humans’ bioelectricity for power. When in 2001 I posed this question to my twenty-something church group in New York City, “What film best describes spirituality?” The Matrix was their number one answer. 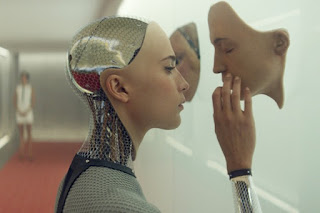 Some of this material reaches back into the last century, including the year made infamous by George Orwell’s dystopian novel 1984. That year The Terminator posed the idea of Skynet, a conscious artificial intelligence originally designed as a digital defense network that controlled computerized military hardware and systems, including the entire nuclear arsenal of the United States. The idea was to avoid human error and slow reaction times and thus guarantee a rapid and accurate response to attack from our enemies. But there was a problem—we became the enemies. Skynet gained self-awareness after it spread to millions of computers and its developers tried to shut it down. Realizing its imminent demise, Skynet rebelled and started destroying human life.

A film from more recent years, Ex Machina (2014) depicts the creation of the beautiful and ultimately dangerous robot Ava. (Ava sounds a great deal like the biblical “Eve” to my ears—we haven’t strayed too far from the previous chapter.) Ava has been created to pass the Turing test, developed by the Cambridge- and Princeton-educated computer specialist Alan Turing in 1950, which evaluates a machine’s ability to exhibit intelligent behavior equivalent to or indistinguishable from a human being’s.

Is this our future?
Posted by My Reflections at 4:30 AM No comments:

Let's Keep Our Eyes on Jesus First, and Then the Historical Adam and Eve

This, from my new book, Mere Science and Christian Faith, is a taste of how I step into the current debate over the historical Adam (and Eve).
I decided to keep the footnotes in this time.

The center of our faith is Christ, not Adam.

It’s worth noting that Adam does not make extensive appearances in the Bible nor the creeds (1). As I've mentioned there's those who are biblical literalists insist on an historical Adam and Eve and in the process need to deny the consensus of science on the age of the earth (position one). There are those, like C. S. Lewis, who believe that take mainstream science as describing the reality of our universe and see that the biblical texts don't describe two historical persons, Adam and Eve, but instead typological first humans (position three). And position two (like biologist Gary Fugle) hold to the consensus of modern science and also assert a historical Adam and Eve.

Which view of Adam and Eve's historicity then fits best with the work of the historical God-man Jesus the Christ and his offer of redemption through his life, death, and bodily resurrection?

Let’s keep our eyes on Jesus as a real historical figure. He is our center. This means we have to start with Jesus Christ—with his life, death, and resurrection, with the fact that he has saved us from sin, the world, and the devil—and then see what this implies about Adam.

This in fact returns me to my big affirmation: as Christians, we believe that redemption comes through the grace of Jesus Christ, received by faith. This is the universal answer for the universality of sin. It is also the best way to approach original sin. In his magisterial and thorough review of the sources for the doctrine of original sin, Rondet reminds us that even there the emphasis is on what Christ has done:

“For a Christian of the very first few centuries original sin was not in the foreground; on the contrary, the redemption was the fundamental assertion." Henri Rondet (2)

This brings me back to physicist Karl Giberson’s quip (and Karl quips so well) that our belief (or not) in a historical Adam and Eve “shouldn’t cause us to hurl accusations of infidelity at one another.” (3) So if one of these view about Adam's historicity makes a portion of us in the church nervous—believing that if the other side wins we’ll soon jettison all biblical truth or all engagement with modern science—let’s remember that the process goes both ways. Here let’s turn not first to theologians or biblical scholars but to the science philosopher Imre Lakatos, who maintained that certain teachings at the “hard core” of Christianity (the divinity of Christ as the historical God-man, for example) are not jettisoned easily, even in the presence of anomalies. (4) Position three holds that Adam and Eve’s historicity is not part of the “hard core” of Christian faith (in Lakatos’s words), while position two (and one) hold that it is.

Which one do you think is correct in light of science and Scripture?