Some (Previously Unpublished) Thoughts on Integrity

I'm finishing up the final proofs on my next book, The Time for Yes, with the hopes that it'll be out around Thanksgiving. On the way there, I was glancing through the galley copy of Say Yes to No and found a section that was left on the cutting room floor, as it were, and thus did not make it to the final printed edition. As I re-read it, I liked it and realized it's just about the right length for a blog entry. So here goes. The chapter begins with a few comments on Time magazine's three Persons of the Year for 2002, the three whistleblowers: Sherron Watkins of Enron, Cynthia Cooper of WorldCom, and Coleen Rowley of the FBI. 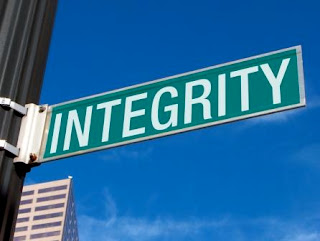 That very summer, I visited Saint Peter’s Cathedral in Vatican City. I stood inside that enormous space devoted to God moved by its grandeur and beauty. (I stood there, incidentally, also moved by a slight embarrassment. On the way in, I had been forced to buy in cheap, disposable pants for five Euros to cover my Vatican-unapproved shorts.) Saint Peter’s Cathedral testifies to a “bigger is better” church design where internal markers tell us the exact proportions by which this great cathedral—under the brilliant design of none other than Michelangelo—dwarfs all others. For example, having walked around two-thirds the length of the cathedral, I spotted the marker noting where Saint Paul’s Cathedral in London would end. To be honest, within those hallowed walls, my Protestant hackles were raised. The medieval Catholic Church persuaded its members with extravagant guilt to make contributions (“indulgences”) to the church—as signs of faith—so that their dead relatives left the sufferings of Purgatory more quickly. I almost heard Martin Luther’s outcry against indulgences in the 15th century. Luther “protested,” and thus raised a major cry of the Protestant Reformation. Nonetheless—and despite losing many faithful to these upstart Protestants—indulgences formed the means by which this awe-inspiring cathedral. Simply put, the Popes had found a fundraising scheme so flawless it would make Jimmy Swaggert jealous, and Saint Peter’s was built on the backs of the poor.
But before I continue, I’d like to counterpoint my criticism by affirming all the good the Roman Catholic Church has done—all the care for poor, all the lives given hope and meaning, all the great art and architecture, Mother Theresa, Michelangelo… even Notre Dame’s college football team. And yet that was the very summer a series of sexual misconduct cases rocked the very structure of the Vatican. Like many throughout the world, I felt horror at the abuse of children’s bodies and trust at the hands of religious leaders. (Something Protestant churches haven’t been immune from either.) Worst of all remains the cover-up based on the dread that “if people know, they won’t believe in the Holy Church anymore.”
At the same time, all this grandeur and opulence of Saint Peter’s Cathedral contrasted markedly with the simple Christianity of Saint Peter himself (on whose place of martyrdom the cathedral is built). It also diverged from the simple worship of early Christians in the tombs of ancient Rome, where these early worshippers sought refuge from the imperial harassment and persecution. It seems the simplicity and integrity of the Christian faith had been easily obscured by the Roman Catholic Church’s quest over the centuries for money and influence. To quote Jesus, who sounds entirely and appropriately prophetic: “For what will it profit them if they gain the whole world but forfeit their life?”

There you have it. I'd be interested to hear your thoughts.
Posted by My Reflections at 8:42 AM 1 comment:

The Natural Knowledge of God

Augustine wrote early in the fifth century in his beautiful opening prayer to Confessions, “Lord, you have made us for yourself, and our hearts are restless until they rest in you.”[1] This is of course a prayer and therefore occurs within faith—it is not therefore technically a proof—and in it Augustine gives our natural yearning for God both an existential and creational caste.

More philosophically, the great thirteenth century Roman Catholic theologian, Thomas Aquinas (who thus wrote before the Protestant/Catholic divide), offered an initial outline of the famous “Five Ways.” First, there is the Argument from Motion: since everything that moves is moved by another, there must thereby exist an Unmoved Mover. Second, the Argument from Efficient Cause: the sequence of causes that make up this universe must have a First Cause. Third, the Argument to Necessary Being: since all things that exist are dependent on other things for their existence, there must exist at least one thing that is not dependent. This then is a Necessary Being. Four, the Argument from Gradation: Since all things that exist can be compared to such qualities as degrees of goodness, there must exist something that is an Absolutely Good Being. Finally, the Teleological Argument: The intricate design and order of existent things and natural processes imply that a Great Designer exists.

Whether or not these Five Ways are maligned or praised, they have offered an excellent outline for subsequent thinkers who make philosophical arguments for God’s existence and for our natural knowledge of God. In fact they really constitute really a summary of what would have been known to his students reading the Summa and therefore not a full-blown proof are based on Thomas’s conviction that human beings have knowledge that God exists, although revelation is needed to know who God is.[2]

In the seventeenth century—right at the flowering of modern science—the mathematician Blaise Pascal offered another proof for God. He began, in a similar vein to Augustine with our existential search for rest: “By nature, we all seek happiness.” But where do we seek it? “Some seek the good in authority, some in intellectual inquiry and knowledge, some in pleasure.” Pascal continued by observing that all these various potential sources for happiness, for a beautiful life, leave us craving for more. He pondered what that meant:

What else does this craving, proclaim but that there was once in man a true happiness, of which all that now remains is the empty print and trace? This he tries in vain to fill with everything around him… since this infinite abyss can be filled only with an infinite and immutable object; in other words by God himself.[3]

C. S. Lewis echoed this conclusion about three hundred years after Pascale with a simple, logically compelling, phrase in his apologetics: “If I find in myself desires which nothing in this world can satisfy, the only logical explanation is that I was made for another world.”[4] Lewis believed that this argument from desire constitute one of the strongest proofs for God’s existence.

It may surprise some in the Reformed tradition—at least those who have read Karl Barth’s cavils against “natural theology”—that the seminal voice of Reformed theology, John Calvin, wrote similarly of the “awareness of divinity.” Calvin was not out to prove God, but to state that inherent in human existence is a basic, vague, and powerful natural knowledge of God. Indeed, in Calvin’s vastly influential 1559 Institutes of the Christian Religion, he wrote, “There is within the human mind, and indeed by natural instinct, an awareness of divinity.”[5] This awareness of divinity or sensus divinitatis is “beyond dispute” according to Calvin.

What do you think about a natural knowledge of God? (I'm working on these ideas as I sketch some thoughts toward a systematic theology in light of science.)