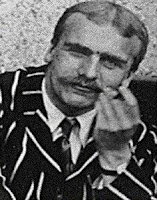 Greg, I think this juxtaposition is quite interesting, but it makes some bold claims. Pinker is making the assertion that neuroscience can touch the previously unreachable areas of human thought (quite literally). Haldane raises the epistemological objection to this claim, but of course this doesn't falsify Pinker's claim. He could easily retort that we do have some reason to believe our beliefs are true - namely, that we have survived evolutionarily. If I mistake what the world means, it might cost me my life. The fact that we thrive shows we are probably getting something right. The question remains why, and it isn't obvious that Pinker's suggestion is impossible.

Regarding Jacks' reflections, there is a sincere debate raging in philosophy of science and evolutionary psychology as to whether science, art, morality and religion can fit in the scientific worldview. We already know, from past Triad discussions, that morality probably can be given a naturalistic basis which science could study. Science itself could be the object of study if we consider sociology a science. Art? Religion? Well, anthropologists have given their best crack at these, as have philosophers. Whether these will ever merely reduce down to good neuroscience, I don't know (and hope not). But there are sincere scientists who would claim that each of these can in fact be subsumed under the scientific worldview. Pinker definitely thinks religion can, as does Daniel Dennett. As for art, you might watch this short Ted Talk by Denis Dutton on the subject of beauty. http://www.youtube.com/watch?v=PktUzdnBqWI