C.S. Lewis and the Joy of Science

I found this as I was rummaging through some older computer files--some thoughts on C.S. Lewis and Joy (the experience, not his wife). I think it's still relevant because, if anything, I see scientific materialism or naturalism (all that exists is the material world) is on the rise.

As Lewis commented himself in Surprised by Joy,

“The key to my books is Donne’s maxim, 'The heresies that men leave are hated most.' The things I assert most vigorously are those I resisted long and accepted late.”

The “heresy” that he left was materialism, or Oxford Realism, for idealism. And then eventually, he turned particularly to Christian faith. 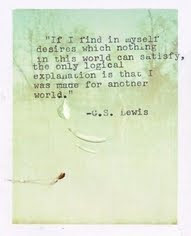 This leads to a famous argument: Human beings seek something that this world cannot satisfy, which points to a God beyond this world. This argument appears in The Problem of Pain and in “The Weight of Glory.”

What is he saying? Is he arguing that this sense of transcendence—or better, this desire for it, which Lewis calls “Joy”—proves God?

No, at least not as a deductive proof. Instead Lewis is making a suppositional argument here: We do not fully understand the desire for something beyond (or Joy) itself, but it opens to a wider metaphysical conclusion, one that points to God who created us.

Lewis’s argument from Joy or desire brings to mind the question of whether many of Albert Einstein’s words about “God” were really about, well, God, such as when he commented,

“Everyone who is seriously involved in the pursuit of science becomes convinced that a spirit is manifest in the laws of the Universe—a Spirit vastly superior to that of man.” Albert Einstein

Richard Dawkins argues (not surprisingly as the arch-atheist) that this stuff in Einstein isn’t really about God, it’s about transcendence. In his Why Science Does Not Disprove God, the science writer and mathematician Amir D. Aczel, contends (as I understand him) that, no, this is really about the Deity, and in fact, believing in God is profoundly compatible with science.

—in Lewis's sense—historically and philosophically, leads to science. I'll leave it there for now.
Posted by My Reflections at 7:35 AM

I love that about Lewis. He believed that the ability to imagine was proof that there is more to reality than we see in the material world.