There is an Italian saying I heard quoted in almost every comparative literature class I took as an undergraduate: "translator, traitor"—or, because the Italian sounds better

In the quip’s cynicism and brevity lies its power, but we know that translation is not entirely betrayal because it promotes the material translated into a new audience. And sometimes it creates alliances and friendships. Translation can even be an act of courage and even defiance—taking insights in one language and daring to put them in another. But it is demanding, and sometimes translation feels like working on the electricity in a house while the power is still on.

As I think about it, to bring together science and Christian faith—or any religious commitment, for that matter—means we have to be committed to translation.

As I pondered that that idea, I realized that my life has been about translation. The first time I pursued this task intentionally was in college when I majored in Comparative Literature. And a few years later, I tried to hone this skill through reading biblical studies in their original languages. In the process, I learned about eight languages (and sometimes even got close to mastering one or two).

This, of course, is a literal form of translation. But, when I extend the term, I realize that, as a first year student at U.C. Berkeley, I was engaging in another form of translation. Having grown up in a religiously non-affiliating household, I became a Christian and found myself translating my Christian convictions into the language of a secular university. And then later, in my PhD, I took a deep dive into religion and science and worked at how these two could speak to one another. 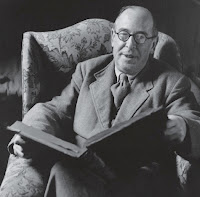 The twentieth century Oxford and Cambridge scholar C. S. Lewis learned this in speaking about the Christian religion to a broad audience during World War II through, among other means, the British Broadcasting Company. (Later these "Broadcast Talks" were published as the widely bestselling Mere Christianity.) As he reflected on this and his various books for the public (meaning not the intellectual elites at Oxford, Cambridge, and the like), Lewis highlighted the theme of translation.

"My task was therefore simply that of a translator—one turning Christian doctrine, or what he believed to be such, into the vernacular, into language that unscholarly people would attend to and could understand." C.S. Lewis

This change implied simplification that, for scholars, felt at times like betrayal. (It's no secret that his good friend and brilliant philologist J.R.R. Tolkien largely disliked Lewis's books of popular theology.) From Lewis's perspective, translation required less nuance in language and simpler sentence structure. For many academics, it also requires simplifying ideas, even rounding off some edges of scholarly controversy—this is of course contained in the negative connotations of »popularizer." 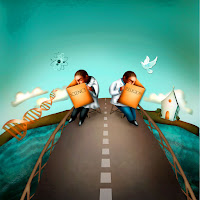 I mentioned above that bringing together faith and science requires a commitment to translation. Maybe it's partly a temperament, or at least an acquired taste. And I wonder if the opposite inclination is why some are drawn to promote conflict or independence between science and religion (I think of Richard Dawkins and Stephen Jay Gould and his non-overlapping magisteria): they just don't believe these two languages are translatable into the other's idioms. They don't accept, or believe in, translation.

Maybe so. At any rate, it's those of us that promote collaboration between faith and science (or in Ian Barbour's words, dialogue or integration) that force us to translate. Or at least to try. Traduttorre, traditore. I hope it's better than that.
Posted by My Reflections at 2:36 PM

Your comments reminded me of how some translators can absolutely ruin books. For example, I read a Communist version of a Turgenev novel which had beautiful pictures, but destroyed the beauty of the writing!

Yes indeed. Translation is an art.