Our Awareness of Divinity

This is more or less my teaching from last Sunday. It will appear in a different form in a chapter of an upcoming book, Connecting Faith and Science: Philosophical andTheological Inquiries (Claremont Press, 2018). I'd be interested to know what you think. 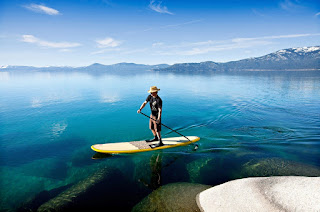 One of the places I absolutely love is Lake Tahoe. I believe I’ve literally been there every year of my life. And so, in a way, it’s part of me. The beauty of its azure lake flanked mountain peaks is stunning. It’s also a place where I sense something deeply spiritual. My mother, who most of her life was not a particularly religious person—she was even anti-religious at times—told me once, as our family would be sitting along Tahoe’s shores: “Here’s where I can see God.” At the time, I let the remark stand without further comment, but it definitely stuck in my head.

That’s what I mean by the title “our awareness of divinity.”

The phrase “awareness of divinity” comes from John Calvin, for whom the appreciation of nature was a key part of his spiritual life. In his vastly influential 1559 Institutes of the Christian Religion (1.3.1) Calvin wrote this:


“There is within the human mind, and indeed by natural instinct, an awareness of divinity.”

This leads me to ask, What is beauty? If we were to Google beauty—especially for images—it’s almost entirely feminine physical beauty, along with products like cosmetics and shampoo, and events like beauty contests. Is that what I’m talking about?

I’m not denying that physical beauty is one form of beauty, but ancient thinkers talked about a broader transcendent beauty. Plato offers three markers for beauty: order, symmetry, and proportion; similarly, Thomas Aquinas, highlighted integrity, consonance, and clarity. Theologian Thomas Oden offers this: “Beauty is that quality or combination of qualities within a thing that gives pleasure to the senses or pleasurably exalts the mind of spirit.”

Ultimately, theologians see this beauty pointing back to God. So do many poets. As Gerald Manley Hopkins, the profound nineteenth century poet intones:

There is a similar experience of beauty as scientists read the book of nature. In Adventure of Ideas, the Harvard scientist and philosopher Alfred North Whitehead pointed to this in scientific as well as artistic pursuits.

“Science and art are the consciously determined pursuit of Truth and of Beauty.”

It is beauty that lures us and that makes truth worth discovering.

And this brings us to the "awareness of divinity" because we see beauty around us, and we want to know the origin of this beauty. The Psalmist declares that he desires God’s beauty,

“One thing I asked of the Lord, that will I seek after: to live in the house of the Lord all the days of my life, to behold the beauty of the Lord, and to inquire in his temple” (Psalm 27:4).

In the seventeenth century—right at the flowering of modern science—the mathematician Blaise Pascal offered a proof for God based on our inherent yearnings: “By nature, we all seek happiness.” But where do we seek it? Pascal wrote, “Some seek the good in authority, some in intellectual inquiry and knowledge, some in pleasure.” He continued by observing that all these various potential sources for happiness, for a beautiful life, leave us craving for more. He pondered what that meant:

What else does this craving, proclaim but that there was once in man a true happiness, of which all that now remains is the empty print and trace? This he tries in vain to fill with everything around him… since this infinite abyss can be filled only with an infinite and immutable object; in other words by God himself.


“If I find in myself desires which nothing in this world can satisfy, the only logical explanation is that I was made for another world.” C. S. Lewis


And there are poets today in the world of rap music that are telling us the same thing, that no matter how hard the contemporary music scene tries, it can’t entirely let go of God. I start my Introduction to Religion class on Tuesday at Chico State with a reflection on God and spirituality in three of the most prominent rap artists today, Kendrick Lamar, Kanye West, and Chance the Rapper. They all talk about, and struggling with, faith in God. Chance, for example, appeared on The Tonight Show and produced a moving live rendition of his song “Blessings,” which includes the lyrics, “I speak to God in public," and "Are you ready for your blessing? Are you ready for a miracle?”

That is one way to express our natural awareness and yearning for God. A readings from the book of Scripture as most Protestants know it, as well as a text from the Catholic Bible--both from around the 1st century AD, offer similar insights. The context, by the way, is idolatry, the worship of creature rather than Creator. Both texts direct us back to the Source of all that is. Having said that, these verses seem clear enough to me. So I'll let them stand on their own without further comment.

Romans 119 For what can be known about God is plain to them, because God has shown it to them. 20 Ever since the creation of the world his eternal power and divine nature, invisible though they are, have been understood and seen through the things he has made.

Wisdom 135 For from the greatness and beauty of created things comes a corresponding perception of their Creator.

“Evidence exists that people are prone to see the world as purposeful and intentionally ordered" (Justin Barrett), which naturally leads to belief in a Creator.

For example, preschoolers “are inclined to see the world as purposefully designed and tend to see an intelligent, intentional agent behind this natural design.” Some use this tendency to impugn belief in God—i.e., we cannot help but believe—instead I am arguing here that it is part of God’s creation. We are created through evolution with an openness to belief.

Another area of research suggests that evolutionary pressures, particularly the human need toward cooperation as it leads to survival, produces a common stock of morality; “a recurring theme is that humans seem to naturally converge upon a common set of intuitions that structure moral thought,” such as “it is wrong to harm a nonconsenting member of one’s group.”

According the the Cognitive Science of Religion, we have then, deeply imprinted on the structures of our mind, an intuition of purpose and of morality. These together offer a sense of a moral Creator.

There are similarities with Calvin’s “awareness of divinity,” which points to a sense of the numinous, powerful and brooding. “Where can I go from Your presence? Where can I flee from Your spirit?” cries the psalmist in Psalm 139. It is the feeling of being out in a forest at night, knowing that no one is there, but feeling something. Often this experience can frighten us. And yet it also provides a witness to the natural knowledge of God. To be clear, God has used the process of evolution to implant this natural awareness.

Sense of the divine clarified by book of Scripture
There is a danger to this “awareness of divinity” if we only read the book of nature. It can leaves both Nazis and altruists unchanged, except with a veneer of belief and an assurance that what they already do now has divine endorsement. An “awareness of divinity” can be the basis of nature-worship, built on a sense of the mysteries of the natural world. It can be a brash, hedonistic worship of ourselves, embodied in the basest forms of contemporary spirituality. Even the Nazi’s propagated an appreciation for what “God is doing through the German Volk” and supported it with the powerful, but vague feeling of the Numinous working to renew the German civilization. (This also seems to be the case for today’s U.S. white supremacists and neo-Nazis.)

The book of Scripture offers clarity and directs this natural awareness of God. It describes Jesus as the one in whom “all the fullness of God was pleased to dwell” (Colossians 1:19). Science acts in some ways, in describing this “awareness of divinity” as general revelation, but those truths receive clarity through God’s special revelation in history, especially depicted in the pages of the Bible. For example, we can find the beauty of God’s design in the natural world through scientific work—and thus be led to conclude that God is an incomparable designer. We can, however, only know that God has created all humankind in the divine image and that God has redeemed all humanity in Jesus Christ through the book of Scripture.

I’ve always been taught to ask, So what? What do we do with this? We might simply enjoy reading the book of nature today and noting how it quite easily leads us to ponder the presence of God, something like my mother’s experience at Lake Tahoe’s shores, “Here’s where I can see God.” And in that we can thank our Creator that we are imprinted with this “awareness of divinity.” I hope that seems like a good start.
Posted by My Reflections at 12:30 AM