The Science of the Devil's Advocate

But first, I'm going to start with groupthink. 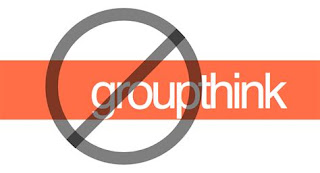 Many of us would like to believe about ourselves that we are "independent thinkers." Psychological science responds, "Not so fast." To use Jonathan Haidt’s word, we are innately "groupish."

“We take on group identities and work shoulder to shoulder with strangers toward common goals so enthusiastically that it seems as if our minds were designed for teamwork.” Jonathan Haidt

We love being in groups or teams, and we tend to think like—not in contrast to—others in our group.

Obviously, there are upsides, but the downside is that teamwork often leads to groupthink. And that brings me to the next topic: one of the glories of science is to combat this natural human tendency by setting up rigorous methods to root it out.

Put simply, scientists know we need colleagues from within the fold to question our assertions.

And, believe it or not, that brings me the office of the Devil's Advocate and why I see connections with the methods of science. Both address the problem of groupthink. Incidentally, the reason I just used the term "office" is that the Devil's Advocate is an official position in the Roman Catholic Church. It was created in 1587 by Pope Sixtus V as one of critical offices of the Sacred Congregation of Rites, who oversee the processes of beatification and canonization.

Anyone you or I put toward a sainthood will have to make it through the Devil's Advocates' counter-arguments (whose official title, by the way, is Promoter of the Faith). The duty of the Devil's Advocate it is to prepare in writing all possible arguments against the raising of anyone to “the honors of the altar.”

In a world marred by polarization, in which we just talk with those in our group and avoid--whether intentionally or not--we need true conversation where "iron sharpens iron" (Proverbs 27:17). The concept of the Devil's Advocate, even after more than 400 years, is still fresh and remarkably compelling.

Posted by My Reflections at 2:16 PM