A manuscript is due for my next book, C. S. Lewis in Crisis, in November 2013. I'm also teaching a class at Bidwell Presbyterian in February and March on the topic. Both of which mean I’ve found myself poring over Lewis’s work and a few of his biographies this December. 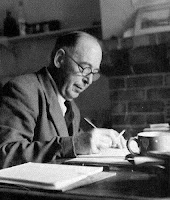 "St Clive" (the "C" in C. S. Lewis stands for "Clive") is, for me, a constant source of interest and even mystery. There's a renewed passion to grasp what he wrote and express my related discoveries about him as clearly as possible. I want to know more about the places I'm stunned by his insights, but also where (and why) I disagree. So I'm reading and reading; I figure somebody else's book will give me the key... or maybe I'll find the buried treasure in some passage of Lewis I've never really thought about before. (For that reason, at least three or four of his books can be found on my bedside table and one or two accompany me on my iPhone's Kindle.)

The result? I don’t feel that I totally grasp him, but I also sense that he’s entirely worth the continual effort. I suppose I’m writing this book “trying to figure out St. Clive.” Truthfully, it’s yet not happened, but the journey is still been worth it.

In December, I did have the amazing opportunity of visiting the Marion E. Wade Collection at Wheaton College, which houses Lewis's (and Tolkien's, Chesterton's, Sayer's, etc.) papers. In that blessed morning of reading original manuscripts and studying his personal collection of books (like his copy of Paradise Lost), I did come upon an unpublished Manuscript (MS-190) named “Fragment about the Parable of the Unjust Steward.”

Here's what St. Clive wrote about this passage from Luke 16:1-9. They are his fourth and fifth points:

4. The Summons, and the threatened dismissal from the stewardship means the steward’s realization--gradual, or leaping full-grown upon him in a doctor’s consulting room--that his employment under the World is temporary. He is going to get the sack. And to be given the sack by this employer is to die. In other words, the soul becomes aware that its real well being must be sought elsewhere. It undergoes conversion.
5. Now comes the joke. For though this story has a very serious moral, it is in the form of a comic story. It is in fact the archtypically [sic] Jewish comic story, the joke the Jews never got tired of; the joke of spoiling the Egyptians or hanging Hanan on his gallows. Why not use all this property, which World [sic] has put in our hands, for the purposes to those World [sic] had in mind? Use it to feather nests for yourself in that region which the World has never dreamed of – by preaching the gospel, feeding the hungry, building a Christian home.

Since it's New Year's Eve, I always do my yeses and nos for the year to come today (i.e., my new year's resolutions). I think walking with St. Clive--and insights like this--are the right place to start.

P.S. I have more to say about new year's resolutions here.
Posted by My Reflections at 10:42 AM No comments:


I'm working on a blog post for cnbc.com, and here's the current draft. (It works with the ideas from The Time for Yes--look right.) I'd love to know what you think. 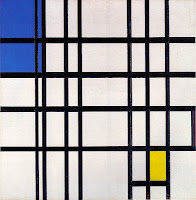 That marker leads me to resolve to live a successful and beautiful life. And here’s what I’ve discovered: Success is grooving with the right rhythm of yeses and nos. It’s not just a pile of yes to new resolutions.
Several years ago, I learned the peril of saying too many yeses. There I was on a treadmill for the purpose of generating an EKG. This on the recommendation of my doctor, “The pains you feel in your chest might be something more serious. Let’s have your heart get checked out.”

So I found myself with electrodes strapped to my chest in a Manhattan cardiologist’s office, with worried thoughts filling my mind about the stories I’d heard of 30-something fathers suddenly dead at dinner tables in front of their horrified wife and children. I had both a wife and daughters. And I really love them. But my heart seemed out of rhythm.

Saying a constant yes to technology partly caused the problem. It was the hundreds of emails I’d receive after a week of vacation. It was the fact I could listen to calls on my cell as I walked home from work. It was the experience of being “wired in” at all times in a fast-paced, technologically advanced city where (I’ve been told) “you’re 55% more likely to have a heart attack if you’re a New Yorker.”

But soon enough, that day in the cardiologist’s office, I heard the words: “Your heart is fine. Any problems you’re experiencing are elsewhere.” (They were in fact a genetic tendency toward high blood pressure.) I felt elated. Grateful. But I also realized that I needed strategic nos to support the important yeses in my life.

By the way, I don't think this experience of saying too many yeses and getting out of rhythm is limited to me. Every time I mention my book, Say Yes to No, people say to me, “I need that book. I have so much trouble saying no.”

Psychologist and researcher Mihaly Csikzentmihaly described this right rhythm best in Flow: “when consciousness is harmoniously ordered:” A flow experience is “so gratifying that people are willing to do it for its own sake, with little concern for what they will get out of it, even when it is difficult, or dangerous.” Finding flow, Csikzentmihaly happens at that sweet spot, the “Goldilocks” point, between too much stress (too many yeses) and too little stress (too many nos), or boredom.

Over the past two decades, I’ve been studying (both academically and popularly) the intersection of science and spirituality. They’ve led me to four resolutions.

First resolution: Be quiet
I’ll start with the spiritual tradition. Its says simply, to find this rhythm we start here: be quiet: I quote the Oxford literary professor and Christian spiritual writer, C. S. Lewis, “The first job each morning consists in shoving them all back; in listening to that other voice, taking that other point of view, letting that other, larger, stronger, quieter life come flowing in.” And, when we get quiet, we can listen “to inward voice one recognizes as wiser than one’s own, and transcribes without fear,” as Naomi Wolf put it.

But this is so difficult: If you’ve tried prayer and meditation, soon, as the 20th century spiritual writer Henri Nouwen described it, “confusing ideas, disturbing images, wild fantasies, and weird associations jump about in [our] mind like monkeys in a banana tree.”

Currently I’m co-directing a $2 million grant from the John Templeton Foundation, which looks at how science and Christian spiritual life come together. More particularly at Bidwell Presbyterian Church (my home congregation), we are doing a study of Mindfulness Based Stress Reduction: Does it reduce stress? Can it provide for a more productive life once we learn to be mindful? So far, the data seem strong and the results are promising.

In mindfulness, we observe experience as it unfolds, and we don’t judge what comes our way. We receive and pay attention. And soon we relax. It appears, in the process, we learn, through this attentiveness and “no” to judgment, we can say a yes to greater mental functioning.

Second Resolution: Chip away through strategic nos
Michelangelo, the master Renaissance sculptor, was once asked by an admirer: How did you sculpt the David? How did you know what to do with that unformed block of the marble. His response? “I simply chipped away all that wasn’t David.” His was the art of negation. The art of “chipping away.”

Contemporary cognitive science has emphasized the importance of focusing and therefore of “chipping away”: One University of London study found that constant emailing and text-messaging reduces mental capacity by an average of ten points on IQ test, which incidentally. (This is the equivalent of smoking one marijuana joint. I find that interesting.)

Staying “wired in” too much increases allostatic load, a reading of stress hormones and other threat responses. We are ready with fight or flight response—great in the past for running away form tigers, but today it creates an artificial sense of constant crisis. So we are locked in continual partial attention. Or continual partial inattention. That’s why blood pressure rises. That’s part of what drove me to the cardiologist’s office.

Third Resolution: Keep working my personal brand
Let’s now work on an Exercise in Personal Branding. Take 10 seconds to write down every word you’d like to describe you. Witty. Intelligent. Dynamic. Patient. Spiritual. Now say no to all but three. Why? Branding experts tell us that a product brand can be described by no more than three words. And the same is true for you and me, for our “personal brands.”

What are my three words? Creative teacher and mentor. This personal brand defines what I do. So I seek to design a plan with these three characteristics in mind and begin work on it. I think consistently on ways to create ways to engage those key branding strategies. And that moves me in the direction of a successful, beautiful, excellent life. “Some dream of success. Some wake up and get to work.”

Fourth Resolution:  Take time for strategic breaks
Stemming from ancient Jewish and Christian practices as well as contemporary brain science, I recommend breakouts: one day/week and 30-60 minutes/day. It’s a time when we can do what we love to do and be with the ones we love. I return to my branding identity and seek to say the strategic nos so that I can find the deeper yeses. And each full day and “mini breakout” everyday, I work to find that rhythm of no-work to make my work better.

Ultimately, the right rhythm cannot be fully described. We have to live it. That’s my hope for a successful 2013. Even as a 50 year old.
Posted by My Reflections at 6:43 PM No comments:

On the way to this Sunday’s sermon, I’ve been reading the story of the “annunciation” or when the angle Gabriel told this teenager, getting ready to be married, that she would give birth to Jesus. (It's found, by the way, in the first chapter of the gospel of Luke.)

Here are a few notes along the way…

It seems to me that the key phrase is Mary’s line, “May your word to me be fulfilled.” Which could also be paraphrased (as it has been by Eugene Peterson), “Let it be with me  just as you say.” In other words, God, yes to whatever You have for me. What amazes me is that this teenager—commentators talk about a 15 or 16 year old—has maturity beyond her years.  (Speaking of commentators, in his well-worn Bible, William Barclay commented that our prayer is often “Thy will be changed” instead of “Thy will be done.")

In the piece by Joan Bohlig that depicts Mary's hearing the angel Gabriel, I like the figure of Mary pointing to herself. Something like “Me, are you sure?” I also note the way the entire cosmos is curved with the angle, as if the cosmos is part of this decision for Mary.

So here’s the question for us: What happens when God interrupts our plans and has something new for us? Does God’s yes meet our yes?
Posted by My Reflections at 11:20 AM No comments: