"I have found there is a wonderful harmony in the complementary truths of science and faith…. The God of the Bible is also the God of the genome. God can be found in the cathedral or in the laboratory. By investigating God’s majestic and awesome creation, science can actually be a means of worship.” Francis Collins 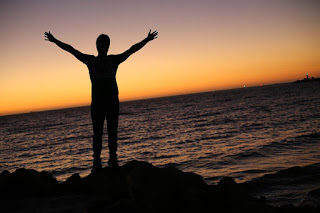 Francis Collins embodies humanity and humility. From what I've experienced and heard (I've met him twice in person and know several of his friends), he's as compelling publicly as he is privately. At an American Scientific Affiliation conference, I video'd him leading a sing-along of Leonard Cohen's "Hallelujah."

Collins wasn't groomed from birth for his current position as a preeminent voice in religion and science. Brought up by free-thinking artistic parents, Collins discounted Christianity until, on the advice of a Methodist minister, he encountered Mere Christianity by C.S. Lewis. Not too long after, he became a Christian while in medical school at 27.
The Human Genome Project represents perhaps the most significant scientific project of the 21st century. In April 2003, it unveiled the full sequencing our human DNA. Collins headed that.

He penned the 2009 bestselling The Language of God, which demonstrated the importance of our genetic code in how God "speaks" through the book of nature. Almost immediately, he was flooded with questions. He decided to convene a small team of specialists, to work out answers, which they posted on a website. This formed the basis for starting the BioLogos Foundation.

President Obama appointed Collins as Director of the National Institutes of Health just a few months later. (As a result, he had to leave official work for BioLogos.) It's a post he's continued with President Trump. Serving under such different administrations is obviously quite a feat! But it says something about the man, his competence and his character. Indeed his is a voice that’s guided us well during the worst global pandemic in a century.

Besides all that (and more), this year he was awarded the prestigious Templeton Prize in Progress in Religion, which this leads to an invitation. If you’d like to hear him receive the Templeton Prize and offer an address through a virtual ceremony on September 24th at 7pm Eastern, use this link to register. (And please share it.)

As I did last week, I'll let quotations again speak most loudly. (And this is one, I must admit, I often use in science and faith talks when I’m searching for something wise to say).

"Studying the natural world is an opportunity to observe the majesty, the elegance, the intricacy of God's creation."

Note: A longer version of these reflections will appear on the Science for the Church website on September 8, 2020.

Posted by My Reflections at 2:53 PM